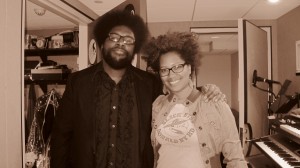 The recent decision by the National Academy of Recording Arts and Sciences to cut 31 Grammy categories has received deserved backlash and reaction from the Black and Latino communities.  The cuts have limited the cultural diversity of the Grammys and include the loss of categories like Best Contemporary Jazz Album, Best Rap Album and Best Latin Jazz Album along with slashing the R&B and Instrumental categories in half.  When I first read about this in the New York Times a few weeks ago, my feelings went from disappointment to rage when I learned that the cuts came after an “open letter” from former record exec Steve Stoute.  He claimed that “the Grammy Awards have clearly lost touch with contemporary popular culture,” and makes his “case” by citing shake-ups in big categories within the last few years  — two of them being victories of Jazz artists.

So, let me get this straight.

The Grammys is a popularity contest?  Excuse me, Mr. Stoute, but I thought the Grammys was at least posing as the authority in recognizing great MUSIC…not popularity.  I thought the MTV Awards covered the popularity contests.  And what’s even more perplexing is what I hope to answer here: Why would a Black man single-handedly spearhead a campaign to stunt the recognition of Black music? Eminem, Kanye West, and Justin Bieber (losers to Steely Dan, Herbie Hancock and Esperanza Spaulding, respectively) are talented artists, but is a temper tantrum on this level the answer?

Before DJ Jazzy Jeff and The Fresh Prince won the “first” Grammy for a rap album, it was Herbie Hancock who won the 1984 Grammy with “Rockit”.  Mr. Hancock put hip-hop, break beats, and this type of Black culture on the major music map.  Having an artist like Hancock introduce hip-hop to the Grammy stage would prove to be of great benefit to the hip-hop community.  I would love for Stoute to explain how Hancock’s 2008 win over Kanye West is a demonstration of losing touch.

While Stout and the Grammy association are trying to make a claim that the cuts give the Grammys more exclusivity and credibility, it looks more like the same tired ass story of money and business as usual, with “special interests” being the motivator.  For certain artists, this could mean never (or never again) being artistically recognized on the level of a Grammy.  Ahmir Questlove Thompson’s initial reaction?  Two words: “It sucks.”

“I mean it’s a travesty because nine of those categories are what I was eligible for,” Thompson explained.  “There’s no more Best Rap Album, there’s no more Duo/Group category for hip hop…there’s none of that stuff so I don’t know…where that leaves me.”  This symbolic rug being pulled from under Thompson and other artists with tremendous artistry, talent and fan base, but perhaps a lack of uber commercial success, are finding themselves in the same precarious position overnight.

Thompson, who has hosted an annual Grammy jam session with The Roots on the eve of the Grammy telecast for the last several years, suggests that the problem has been misfired at the amount of categories, and the real issue may lie elsewhere.  “If anything, I would like to adjust the voting.”   He went on to tell me about an experience he had at the 2008 Grammys, when he was sitting with a group of artists in the Latin category.  Singer/songwriter Jose Feliciano swept most of the categories, to the frustration of many of his contemporaries.  They argued that Feliciano continued to be a thorn in their side because he was the most recognized name on the ballad; that he was winning on his familiarity and not necessarily on musical merit.  “In 2009 when I got my ballad and I was looking at the categories that I don’t know, you know I found myself actually validating that whole issue.  I think if there has to be an adjustment made, I wish we could sort of make it like the Mercury Prize in Europe or like how Canada’s works. There’s a jury…a jury of knowledgeable music snobs, bloggers, musicians…a jury of people that vote on a particular category and they’re very knowledgeable of it.  I think that’s a better adjustment for the awards.  It’s sort of like a license.  When u get your license, they’re not gonna let my C Class license drive…they’re not gonna let me operate a bus or a truck. They won’t let a vegetarian judge a Texas rib contest and I don’t think that certain industry people should just have access to certain categories that they just mark off.”

Agreed.  It seems as though Stoute got it way wrong, and the consequence is more than what he bargained for. “Since your complaining, Steve Stoute, we’re gonna take all your candies and cookies away,” Thompson illustrates, describing the frustration he suspects NARAS had with Stoute’s whining open letter. Stoute’s rant over who is and isn’t Grammy worthy, arguably caused an important balance of Blacks and Latinos to go down in the flames of never being acknowledged in music’s “highest honor”.   Way to go.  The affects of this decision are too early to predict, but the message that says artistry plays a back seat to economics is loud and clear.  “But you know, it’s like half these people aren’t necessarily doing what they do for any monetary award but the occasional annual pat on the back [from the Grammy committee] would really be nice.”

2 responses to “The Grammy Cuts (Its figurative nose, perhaps?)”