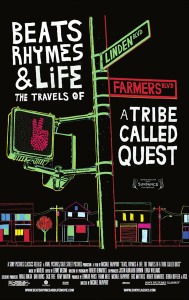 When I first heard that there would be a documentary about A Tribe Called Quest, I was completely psyched.  Tribe, as I affectionately call them, has been one of the most important parts of the soundtrack to my life, literally — period.  As paramount as that sounds, scaling it back even one iota would be a crime.  They were just that influential and impressionable on your girl.  I like Michael Rapaport, although I have some issues with him every now and then and was interested to find out that this was his project.  I wanted to see where this would go.  Then some months ago, I started hearing mumblings about the documentary having a great deal to do with the public and private turmoil between the group’s members.  Sure enough, quite a bit of the documentary is dedicated to the frustrations and personal relationships within the group.  The audience learns about the genesis of the group and the dynamic between its members, with Q-Tip being the extrovert perfectionist and motivator, at times to a fault, Phife Dawg being the uniquely talented, but admittedly often distracted artist, and Ali Shaheed Muhammad, the group’s centered DJ, whose quiet but introspective demeanor created an air of a role of confidant and often backbone of the group.  But let’s not let it be more than it is, actually; the dynamic between Q-Tip and Phife Dawg being no more than the story of what comes with being friends since the age of 2 and being in a group “all of your adult life,” as Phife puts it.  It’s bound to get to some level of ugly.  However, I’m happy to report that what I saw was ultimately a story about love.

How well was that story told?  Told pretty well, in my opinion, mainly because largely, the band  spoke for themselves.  There was little room for opinion from outside sources, which was great on the personal side.  On the musical side, I would have LOVED to see more interviews from those oh-so-relevant perspectives of people like Busta Rhymes.  The main “outside” musical perspectives came from Pharrell, Common, The Beastie Boys and Pete Rock; the latter being the one with the most perspective, but probably the least camera and talk time.  No disrespect to any of the other cats mentioned, but when it comes to Tribe, I think, by what people are most intrigued, is their music and how they came to that aesthetic.  So I think interviews from other producers of that era would have been really valuable.  Further, to interview some of the artists, who Tribe so brilliantly sampled, would have added an immense value and appreciation from the fans.  But let’s move on…

St. Albans, Queens New York was home to some of the most important figures in jazz.

What was so enjoyable for me was seeing a documentary about hip-hop which talked so much about jazz.  But, we are talking about Tribe, here. Again, since it’s basically a story told by the group in their own words and not some other unfortunate style of story-telling which happens so much with music documentaries, the truth was evident and really beautiful to witness.  From the outset of the movie, I felt jazz, automatically.  The opening credits were underscored by what sounded like some dope re-harm of “Scenario”.  Knowingly, I was in for something special.  Within the first ten minutes of the movie, Jarobi White (an original member of ATCQ, who left the group after their first album) takes the audience on a tour of St. Albans, Queens and its famous jazz mural.  St. Albans, where Q-Tip and Phife grew up, was at some point, home to John Coltrane, Louis Armstrong, Billie Holiday, Lena Horne, Ella Fitzgerald, Illinois Jacquet, and Count Basie — just to name a few.  For Tribe, the mural was a symbol of the influence which jazz would have on the group and the affluence which they hoped to attain, moving up in the world both artistically and socially.  As the story unfolds, we learn about how the group developed musical and personal relationships with The Jungle Brothers and De La Soul and how they would get their first big break through the iconic New York-based DJ Red Alert , who happened to be the uncle of Jungle Brother member Mike Gee. Subsequently, A Tribe Called Quest also received the largest recording advance ever given to a hip-hop group at that time.

Above anything else, in this documentary, you see how much Black culture influenced this ground-breaking group, with Q-Tip drawing consistent parallels to jazz, soul and even comedy.  You get to really see first-hand how ingrained their culture really is, as even in casual conversation, Tip references Stevie Wonder or Duke Ellington to illustrate his points.  He divulges the back story behind the curious “El Segundo” explaining that it was a part of a phrase Redd Foxx often said on the sitcom Sanford and Son.  The Roots’ Black Thought called Tribe the “Miles Davis of their time,” when discussing their seemingly odd and Afro-Centric attire saying of that time “..they just know about some shit we’re obviously not up on.”

Also, this point can be applied to their signature sampling style.  A Tribe Called Quest brilliantly ushered in a huge wave of jazz lovers, who may or may not know that they’ve become indoctrinated.  Songs like “Bonita Applebum,” “Check the Rhyme,” and “Electric Relaxation” are loved equally (if not more) for the musical as well as lyrical content.  Q-Tip discloses a few of his samples, and credits his father as one of his earliest influences:

Q-Tip, who was the group’s most prominent producer, shows a glimpse of his inner music junkie as he sits in a chair with a single turntable and holds up a Lonnie Smith album which he sampled for “Check the Rhyme.”  He talks about buying the album for five dollars from a record store called Jazz Record Center.  The film also follows the group venturing to a record store, walking past posters from John Coltrane, Lee Morgan, and Grant Green, as they flipped through albums and scratched and cut on the stores set-up turntable.  It was this type of visual insight that made this film so remarkable.

It’s not all fun and games, as the documentary chronicles Phife Dawg’s long-time bout with diabetes and shows how it affected his family and the group.  They discuss the ultimate falling out between he and Q-Tip at the 2008 Rock the Bells tour and Phife’s need for a kidney transplant soon after.  But it also shows the redemption of friendship, when he receives a text from Q-Tip which read, “Godspeed” before Phife’s kidney transplant surgery, as his wife was his donor.  It ends pulling on the heart strings of its audience, as Ali Shaheed spins “The Chase Part II” while Q-Tip and Phife practice dance moves for the song.  The innocence in that boyish moment seemingly makes it all worthwhile. The documentary closes with a little known fact-tease which stated that the group still has one more album on their original 1989 contract with Jive Records.

All in all, I thought that this was a job really well done.  Rappaport seemed to have taken more than a few pointers from his former employer Spike Lee and it paid off.  For the oober Tribe fan, who is probably the largest audience this film will garner, it was a film with enough little-known facts, as well as all of the reverie and sentimentality which we all wanted to experience.  Two thumbs up.♦

For all the jazz hip-hop junkies, if you’re interested in the jazz samples of Tribe and others during this  era in hip-hop, I recommend an album from Blue Note Records called Droppin’ Science.  You will hear many of your favorite hip-hop samples in a new light.  For example: