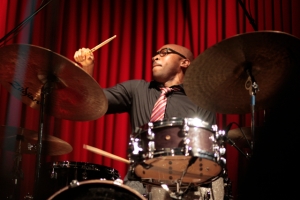 When I met with Eric Harland at the 92nd Street Y in Tribeca, I got a glimpse of a day in the life of jazz music’s most in-demand drummer.  He had just arrived to New York; his next east coast stop following a triple appearance at Newport Jazz Festival.  Harland, who is arguably the hardest working drummer in the jazz biz, played more drums in one day, than most play in a week.  I’ll give you the run down: As one-quarter of the co-led all-star ensemble, James Farm, Harland got started at one 1 PM.  Then, on to trumpeter Avishai Cohen’s group at 2:20 PM.  Then finally playing with saxophonist Charles Lloyd and tabla master Zakir Hussain at 4 PM.  One has to wonder how anyone can wear that many musical hats over the course of a few hours.

I got to ask him about it during sound check of his next performance; a live on-air double bill shared with saxophonist Marcus Strickland and produced by The Checkout’s Josh Jackson for WBGO and NPR Music.  I managed to whisk Harland away, while the rest of his quintet went over some charts.  On keeping it all together, Harland explains that the balance in his personal life helps keep his professional copiousness intact.  “Family gives me a sense of structure, a sense of center, and so if I’m working too much, then that starts to get compromised a little bit.  And you know, I enjoy the money and I enjoy the opportunity of playing, but having a family definitely gives me a deeper connection with music, and the people around the music.”  A father of two young children, Harland’s playing is further influenced by the experiences of parenthood.  “As a father, you make a lot more sacrifices than you would if you didn’t have children or didn’t have a spouse.  And I like taking care of people and nurturing others on stage and stuff.  As long as I keep it balanced and I’m eating [right] and stuff…it’s a beautiful paradise.”

“Coming from Houston, you always write,” says Harland.  “At least for me, because I started in the church, and so I’ve always kinda had this sound that I wanted to kind of bring to fruition through a band.  I think everyone has a sound that they really want to bring across…but it’s just [a matter of] how to do it, or having the vehicle to do it.”  Unbeknownst to their influence, Harland’s musical family helped drive him toward the drums.  “Piano is my first instrument.  [But] I didn’t pursue the piano because there were too many piano players in my family.  My mom is a piano player, my grandmother, my aunt was, my uncle…he could play piano but he was a trumpet player and a vocalist and stuff…and they were all vocalists as well.  So needless to say, when I was in the room trying to practice, there was all this critiquing going on.  Always someone over your shoulder like, ‘No that’s not right, you gotta play the scale like this.  Put your fingering like this.’  And I was like, you know what?  There was no room to explore…I would just wanna mess up for no reason and just see what that feels like.  So I was also kind of at the same time playing the drums, just kind of messing around with it.  And I think I had more freedom with the drums because no one really knew what was going on.”

Harland honed his skills while he attended Houston’s High School of Performing and Visual Arts (HSPVA); a school unparalleled at preparing and producing some of the finest jazz musicians at the academic level.  Harland is in good company as drummers go, with Chris Dave and Kendrick Scott as fellow alumni.  By the time Harland graduated from high school, he had already won a plethora of awards, and was playing professionally.  Harland subsequently came to New York City on full scholarship to the prestigious Manhattan School of Music, and quickly became an in-demand drummer garnering a list of collaborators too extensive to complete.  To name (literally) a few: Wynton Marsalis, Joe Henderson, Michael Brecker, McCoy Tyner and Betty Carter, who Harland has a long-standing musical friendship with.  But it was his time with trumpeter extraordinaire Terence Blanchard that would develop Harland as a composer.

“Transform was kind of like my first thoroughly thought out piece, you know, that I really had an idea for and I wrote it specifically for that band,” says Harland of his compositional contribution to Blanchard’s album Bounce.  Like, I had Terence in mind, I had [saxophonist] Brice Winston in mind.  [Bassist] Brandon Owens, at the time…and we even tried it a little bit before that.”

Harland also makes a point to discuss the importance of timing.  “Terence was on that edge of like ‘OK, I want to start welcoming other people’s tunes’ but he wasn’t quite ready yet, which was a good thing because I don’t think a lot of our tunes were ready,” confesses Harland.  “I think the change in personnel…also [his] working at the Monk Institute with Herbie [Hancock] and Wayne [Shorter].  That generation still being excited about new things, I think helped open his mind, which gave us the opportunity to write.” 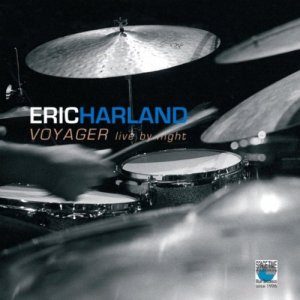 Transform is a fast 7/4 anthem-like piece with strong sensibilities both rhythmically and lyrically.  On Voyager, Harland keeps these elements and  demonstrates his vast pen, with songs ranging from ethereal to explosive.  “I love melody,” says Harland.  “Those are the things that move me.  I mean drums really move me, but I don’t think as much as harmony.  So it’s amazing, drums were always an adjustment.  Like, I had to really learn how to play drums.  Because when I would listen to bands, I would never listen to the drummer.  The lyricism that was going on was more interesting to me than what the drummer would be doing.”

With such an illustrious career, Harland’s fairly recent emergence as a front man has surely been pondered.  Harland explains, “I prefer the background a little bit. I like to observe what’s going on and kinda fix it from the back.  The drums always seemed like a lot of chops, you play super-fast…it’s real showy…and you know, I had to kind of grow to be a showy person.  So I think that’s what took me so long as far as my band.  It took people going ‘Get out there!’  And sometimes you need that because you never know your potential until you really get out there and explore the things that need to be explored.  Just exploring yourself.  I think that’s what life is about.  Just discovering who you are…this time.”

In my examining the composing drummer, I am always fascinated about the process of writing.  As a composer, Harland draws from his complete musical wellness, in addition to the opportunities presented from modern technology.  “At first it started at the piano because that’s what I love,” says Harland.  “But then with all the notation software and stuff like that, you have the freedom to be like a painter, where a painter can just throw paint on the canvas, and then try to find the beauty within the chaos that’s just been presented to him or that he sees.  Well, with the notation software, sometimes I experiment with kind of throwing notes on the page.  Seeing how that sounds, and then orchestrating from a different angel.  Because it gives me a different thing to think about.  And plus it gives me something I would have never come up with unless I took that chance to do that.  Then sometimes I compose from the drums.  I think of some really fun rhythmic idea I really want to do, and then I just mess around with it.”

Now with an established body of work, it’s full steam ahead for Harland as an artist.  In addition to his own group, Harland is also busy with James Farm; a co-led ensemble of musicians at the height of their powers, which includes saxophonist Joshua Redman, pianist Aaron Parks, and bassist Matt Penman.  The band released their self-titled album in April, and it received critical acclaim across musical boards; a reflection of the goal of the record.  This album speaks to jazz audiences, but not exclusively.  The music is warm, cohesive, and fresh with a perfect balance of intention and profuse unrestraint; a harmony as intriguing as their collective name.

“It’s an acronym,” Harland reveals.  “Josh, Aaron, Matt, and Eric.  The “S” is just the plural form of the name.  Like James’ Farm, but we just left out the apostrophe.  And then “Farm” was just a way to try to describe what we wanted to do.  When you think about a farm, it’s nurturing , organic, something that feeds the body, cultivation, harvest, seed planting…you know. These were things that we felt really related to the style of music we wanted to do.”

As for what’s next for the man who is everywhere doing everything, Harland gives some insight, “I have a certain sound in my head.  So, you know, I think maybe that just comes with age, as I’m getting older….What am I gonna do now?  And then it’s always good to just kind of  have a change to do something different.  I have some ideas…they haven’t been ironed out yet.  I definitely have this one song that I want James Taylor to sing.  But I love taking my time.  I’m like a slow mule…like, I want to just think about it for a while.  When it’s right, I mean it’s just gonna soar.  Because when you develop a sense of trust in something greater, versus it’s just you, because as gratifying as that may feel, it also beings about pressure, feeling like you have to do it.  As long as my desire is there and I can act upon that, it’s going to be beautiful.”