Thanks for your patience.  Sorry about the Album for the Week hiatus!  It’s been a busy summer!  But this album is worth the wait.  Closed my eyes, and ran my fingers across the library and came up with THIS gem! 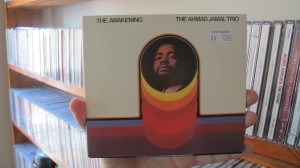 Ahmad Jamal’s 1970 classic The Awakening is a preeminent outing, which embodies and fuses a range of pianistic heritage and innovation, making this album a timeless reference for every modern pianist to follow.  This album explored the trio in ways that had not been done before.  Jamal’s warm, gospel feel and lush re-harmonizations on “I Love Music” are so ahead of their time; a mass appeal to hip-hop producers and DJs.  The mix alone is raw, edgy and moody.  Sampled by the incomparable Pete Rock for rapper Nas’ debut album Illmatic, “The World Is Yours” was one of the most stand-out tracks on this seminal hip-hop album.  (I spent many days with my investigative ears on, determined to figure out exactly how Mr. Rock chopped this song.  And I did!)  Nas’ brilliant and jazz-inspired phrasing over Jamal’s haunting progressions and Pete Rock’s gritty drum programming and scratching created a modern day masterpiece.

Jamal Plays Jamal, released in 1974, is another hip-hop treasure, with songs like “Swahililand” and “Pastures” being sampled by J Dilla and producer Ski, who created an impeccable New York inspired backdrop to Jay-Z’s “Feelin’ It” from the classic Reasonable Doubt album.  But unlike the funk/groove oriented Jamal Plays Jamal, with all original compositions, the use of electric keyboards, and intricate string arrangements, The Awakening is a musical love letter to integral artists like Herbie Hancock, Jobim, and Oliver Nelson, whose compositions Jamal interprets most bewitchingly.  Songs like “Dolphin Dance”, “Wave”, and “Stolen Moments” are transformed without compromise, or even intricate rearrangements; a testament to the elastic possibilities of the acoustic trio, and Jamal’s obvious openness to all that was modern and happening around him in the present.  Like Herbie Hancock, and Hank Jones, Jamal always sounds ahead of his time because he always embraced what was both current and on the horizon.  As stripped down as this album is in theory, at points it sounds almost symphonic, thanks in big part to the deft and melodic bassist Jamil Nasser, and the agile Frank Gant on drums.

This is just one of those perfect records.

5 responses to “Alternate Takes Week #8: Album for the Week”