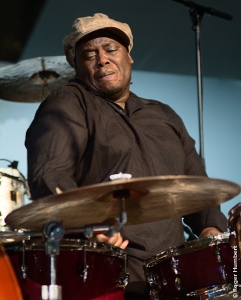 For decades, Philadelphia has boasted one of the most burgeoning jazz scenes in the world.  A thriving commorancy to legends like John Coltrane, Dizzy Gillespie, the Heath brothers, and Philly Joe Jones, to name a few, the City of Brotherly Love has been the backdrop to one of the most essential eras in jazz.  Philly remains a cornucopia of jazz heritage, producing the likes of Christian McBride, Kurt Rosenwinkel, Derrick Hodge, Rodney Green, Orrin Evans, Ari Hoenig, and Jaleel Shaw.  Drummer Johnathan Blake is at home among this esteemed group, becoming one of finest talents on his instrument, and now making his mark as a leader.

Blake will release The Eleventh Hour (licensed by Sunnyside Records) at the top of 2012.  An extraordinary debut, Blake exhibits both his breadth of chops and his uncanny compositional skills.  The all-star ensemble includes saxophonists Mark Turner and Jaleel Shaw, pianists Robert Glasper and Kevin Hays, trumpeter Tom Harrell, bassist Ben Street, and Gregoire Maret on harmonica.  The Eleventh Hour is a fine album that is splendidly unfeigned and musically abundant.  This dynamic cast of players, who are all leaders in their own rights, synergize to produces one of the best straight-ahead jazz albums I’ve heard in a very, very long time.  Blake credits the long-standing brotherhood of his band members.  “What’s great is that most of the guys that are in the band are on the record, so we had been playing together for years,” he explains.  “Rob and I have been playing together since maybe the late 90s, so he’s played mostly all that music.  Ben Street, Jaleel, Mark Turner…my homeboys.  The only newcomer was Kevin Hays.  We had played together a couple times, so for him most of the music was new and it was nice to have him be a part of this project because he brought a different sound to some of the older music, so it kind of helped us gain a different approach to our playing, so that was good.”

The Eleventh Hour is not only a well-cast, brilliantly executed album, but the repertoire is striking and distinctive. Blake penned most of the albums tunes, with the exception of a few.  The band covers Randy Newman’s “Dexter’s Tune” from the tear-jerker movie classic Awakenings.  Written for Dexter Gordon, who appeared in the movie and passed away before its release, Blake’s band captures the feel and memory of the saxophone great, with Mark Turner’s gorgeous take on the thoughtful melody.  Blake also recorded Glasper’s “Canvas”, a moody, mantra-like beauty in 5/4 that features a vibrant exchange between Maret and Glasper, with Blake’s tasteful grooves elevating the experience and Mark Turner blazing the vamp.  The album also features a blithely swinging number entitled “Blues News”, written by Blake’s long-time employer, Tom Harrell.

Blake’s compositions are equally outstanding, full of  versatile virtuosity.  Blake began writing music very early, egged on by his youth ensemble director.  “The instructor of the program pretty much required us to all write music, and we all had to bring in a tune.  When we first started out, [we were] playing standards repertoire and some Horace Silver, some John Coltrane, but then I would say when I was around twelve or thirteen, he said, ‘I want you guys to come in with a tune,’ and so that’s how I first got into it.”

Born into a musical family, Blake began his musical journey modeling after his father, John Blake Jr., a renowned jazz violinist.  Young Johnathan began playing the violin as well at age three, before moving on to piano, and then landing most assuredly on the drums.  The ASCAP Young Composers winner would benefit from his formidable years as a multi-instrumentalist.  “For me, I think starting out with violin and piano kind of helped me be more aware of melodies.  I was talking to a couple different drummers who were also like that.  Like, Brian Blade is one that comes to mind.  Oddly enough, he started on the violin also and he said that kind of helped when he’s hearing melodies.  He also takes the guitar on the road when he travels, so I think there’s something to that…when you have that luxury of being able to play a melodic instrument.  I mean, the great thing about playing piano is that you have the percussive side but also the melodic sides, so it’s like a full orchestra.  It’s pretty amazing.”

Blake acquired the tools early on, but a push from his Dad undoubtedly developed his confidence as a composer.  Blake recalls, “I remember like the first one or two compositions, my dad would help me with the notation.  Then he was like, ‘You got it…you have to figure it out.’  And that was great.”  Blake also credits the willingness of his employers to wholly share the stage, and welcome new music.  “I think the other thing that happens too is that a lot of leaders, like in Kendrick [Scott’s] case playing with Terence Blanchard, Terence is open enough where he allows the other members  of his band to start composing, so that’s another way that allows side men to start getting their composer chops up and eventually getting them on records.  I think that’s kind of helpful too, and gives that extra little push to hopefully continue this [trend].  I’ve had the luxury of working with Kenny [Barron].  I’ve had the opportunity to bring in some tunes, so it’s really great to have a leader who’s open like that, where you don’t have to necessarily play all his or her tunes.”

Blake’s compositional aptitude and superior drum skills made for a natural progression to record as a leader.  “I think a lot of it has to do with [the fact that] our role is a more supportive role, like you know, backing the band, and pushing the band or whatever,” says Blake of the recent emergence of drummers who have become front men.  “So you’re never thought of as leading a band or writing your own music.  With this music, we always have to try to reinvent ourselves so to speak, and really try to push the envelope, and always try to grow.  So I think out of that came this idea of having drummers thought of as not just sidemen or as background support, but more as like, ‘Let’s see what this guy’s doing.’”

With the decision to record out of the way, the challenges of independently financing a record in the current industry climate loomed.  Blake welcomed the task, setting up a successful campaign to help raise the funds.  Blake used IndieGoGo to get his audience’s attention and implore his fans’ support.  This new way of using funding platforms like IndieGoGo and KickStarter have proved successful for other jazz musicians like drummer Otis Brown III, and guitarist Mike Moreno.  “I think the empowering thing is really just connecting with some of the fans,” says Blake about his campaign.  “We travel all around and you don’t even think about certain people that you meet and exchange emails with and become Facebook friends with, and you go on KickStarter, and it’s like man, this person from Spain who I met ten years ago just gave me money.  So, for me, I really like that kind of exchange and connection with some of the people that I’ve met along the road, on the journey, so that’s great.”  Like that early push from his father, Blake would now have to push himself on the business side.  “Some of the challenges were…I’m not the best salesman so it’s really hard to get in that mode.  You have to push yourself and get the word out, so it’s a challenge.  I’ve really been trying too, because I’m kind of on the shyer side, so it’s hard to be asking some people [for money].  I really appreciate everybody that’s donated so far, and even the ones that can’t, they’ve really just been sending encouraging words, which is really helpful for me, because it helps me to know that I’m on the right thing.  And slowly I’m saying that OK, this has allowed me to get out of that shell and really not be afraid to sell myself so to speak, because you have to be your own manager, your own sales person and stuff like that.  So it’s like, I have to learn how to do it some time, and now with this record coming out, this is the better time than ever.  So I’m really digging it, and really reconnecting with a lot of friends that I haven’t seen since junior high or high school, who have sent money.”

As the music industry shrinks and record labels continue to fold, it has become increasingly difficult for jazz musicians to present their music, no matter how impressive their talents and credentials may be.  However, the upside to the current circumstance is a leveling of the playing field for artists who aren’t in the small pond of jazz musicians signed to major labels.  “I think there was like a period where after a lot of these record companies went under and a lot of artists – especially jazz artists — were like ‘What are we going to do, how are we going to get our music out there?,’” says Blake.  “It’s not like the “Young Lion” movement where all these cats were getting signed to Verve, and stuff.  So we caught the tail end of that but it’s like, what’s my direction now?  For me, it’s kind of like a full circle moment.  There was a movement where like people were selling their own CDs out of the trunk of their car or whatever, and marketing themselves, and I think it’s getting back to that.  I really think this is a good time for us, and I also think that because of that, it also then showcases music that we want to play, which is allowing us to be writers.  Allowing drummers to come out and write because we have this outlet.  We don’t have to necessarily play the music of Billy Strayhorn; we can play the music of E.J. Strickland, or the music of Antonio Sanchez.  Now we kind of have a say.  It’s been a long time coming.”♦