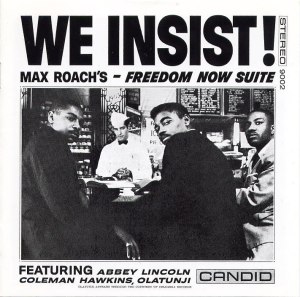 Jazz (Black American Music) may not be the first genre to come to mind when dealing with the subject of music which is socially conscious, but it should.  While The Impressions, Stevie Wonder, Marvin Gaye, The O’Jays and Gil Scott-Heron gave voice successfully to the plight of Black America through song (and action), jazz musicians were making overt statements about race and culture many years before, and continued doing so alongside their peers across a range of musical classifications.

When we think about it, jazz music is essentially a personification of everything this country stands for in theory, but fails at in practice: freedom, democracy, liberty, and justice.  While some may condense the Black freedom struggle to the years that spanned the Civil Rights Movement, it’s not hard to understand why this is an incomplete and naive summation.  Within the last few years, Oscar Grant, Sean Bell, Timothy Stansbury Jr., and James Craig Anderson have become household names and global reminders that America continues to bounce the check of equality that Dr. King so eloquently spoke of in his “I Have a Dream” speech almost fifty years ago.  From the 16th Street Baptist Church bombing in Birmingham, to the African Liberation Movement, jazz has been an important musical narrative of the journey of Blacks in America for decades.

A Message In Our Music is a three-part series from Alternate Takes, featuring candid and enlightening conversations with modern masters Christian McBride, Vijay Iyer and Jason Moran.  Each will discuss jazz from this under-examined angle, while reflecting on the albums that are most meaningful to them on the subject.  Don’t miss this very special series this Black History Month!