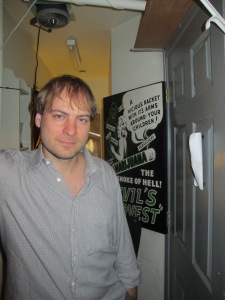 There is nothing conventional about drummer Ari Hoenig.  Even as a sideman, he is not your typical drummer, with over sixty recordings to the much-in-demand Hoenig’s credit.  However, Hoenig’s amalgamation of technique, innovation, and creativity are what make him difficult to compare, and impossible to peg.

Since the Philly native’s emergence on the New York City jazz scene in the late 90s, Hoenig has played with the likes of Chris Potter, Kurt Rosenwinkel, Dave Leibman, Joshua Redman, Shirley Scott, Richard Bona and more.  Hoenig also found a long-standing home in the trio’s of two of today’s most exceptional pianists: Jean Michel Pilc and Kenny Werner; the former urging Hoenig early on to make steps toward the forefront.  “He never really gave me any musical advice [per se], but he did build my confidence a lot.”  Jean said, “For one, you should definitely start your own band. I’d love to be a part of it, and even if not, you know, this is something that should definitely happen.”

Pilc surely knew about what he was talking and would later occupy the piano spot on two of Hoenig’s albums.  Hoenig released his debut album, Time Travels, in 2000, and never looked back.  With eight albums as a leader, Hoenig has been a trailblazer for the new wave of drummer front men, and the ultimate prototype of the modern drummer’s wingspan. 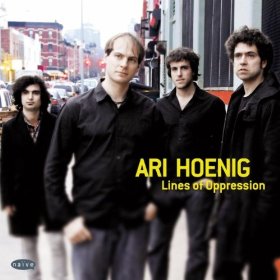 Hoenig is also a flourishing and prolific writer.  Like every drummer in my “investigative series”, I asked Hoenig about his writing process.  His latest album, Lines of Oppression (Naive Records), offers seven original tunes, including the title piece which is a mixture of complex melody, lush harmony, and rhythmic intensity.  The album features previous collaborators and pathfinders in their own right; pianist Tigran Hamasyan, guitarist Gilad Hekselman, and bassists Orlando Le Fleming and Chris Tordini.  “I’ve never studied composition formally.  I mean, I’ve always kind of composed stuff just on my own but I’ve never actually had a class in it.  But I’ve noticed that there are a few different ways that people compose.  At least the way that I describe it.  From the melody is one, which is not a way that I do; almost never.  Maybe one song I started from the melody.  I start out with the chords usually…the harmony.  Probably eighty percent of the time, my songs are written with the chords first, the harmony first.  I sit at the piano.  I do play piano a lot.  And I write on piano all the time.  The drum part, as you will, actually never ever gets written.  That’s the very last thing, if it even is.  So, I don’t think about what I’m doing when I play on drums at all in terms of writing.  So, when I sit down and everyone has gotten their thing together, then I just play whatever seems right.  I write a few tunes with the bass line first, as well.  If you listen to any of Dave Holland’s music or…a lot of bass players actually write like that.  Like, a bass line, and then the tune kind of comes around it.”

Before I sat down to chat with Hoenig, I read somewhere that he hated the actual process of song writing.  With Hoenig being the author of one of my favorite ballads, “For Tracy”, I half-dispelled the question when I posed it to him, and was surprised when he confirmed on the matter.

“Oh yeah, that’s totally true,” Hoenig admits.  “The only part that I like about it is finishing.  I like to mess around with coming up with ideas, but as soon as this thing clicks in my head that ‘Oh, I should write a piece, and this should become a tune…’  From that moment until the moment I finish the song, I can’t stand it.  I don’t like the process.  Why don’t I like it?  Because it makes me feel…it’s like a puzzle.  It’s a challenge but it’s more than that.  It’s a personal challenge.  It gets in deeper than you’re trying to just do a puzzle that you know you’re going to eventually do, because you know there’s a solution.  But writing music, you don’t really know that there’s a solution.  Nobody’s worked it out before you.  If you’re writing a piece, you know…so what if it never works out?  I don’t know…I mean, it’s so personalized and it’s a certain amount of angst for me.  I have to force myself to do it. If I want to write a piece, I have to really force myself.  I’ve actually spent very, very little time writing music, and I haven’t written any songs that I haven’t used, except for one that I wrote in high school that is just stupid that I will never use.  It actually only took me five minutes to write.”

Hoenig’s off-center humor and humility augment the intrigue of his musical mystique.  Beyond being a conspicuously skillful drummer with seemingly boundless creativity, he can literally transform the use of the drum in ways rarely seen.  Hoenig’s affinity for melody has been manifested in his mind-blowing ability to create fluid melody lines on the drums, making the “non-melodic” classification of the instrument a misnomer.

Hoenig’s first two albums (Time Travels and The Life of a Day) are completely solo recordings.  Hoenig plays a collection of originals and standards, using the drums to produce aspects of the composition that are seemingly impossible to create.  This is most recently illustrated on his latest album, where the band performs their version of Bobby Timmons’ Moanin.  Hoenig brilliantly takes on the soulful melody of the call-and-response type bluesy classic.

“I started playing melodies on the drums pretty early on,” explains Hoenig.  “I guess [I was] around 18, and I heard Max Roach, for one, do it.  Jeff Hamilton did stuff similar, and another drummer named Earl Harvin who I was really influenced by.  Not so much [for] getting the notes out of the drums, but being able to play a tune on the drums with the basic contour and the ups and downs, and even more importantly, the phrasing.  Just being able to get the phrasing on the drums.  So if you listen to Mack the Knife and you hear Ella [Fitzgerald] sing it, you want to kind of be able to emulate her phrasing.  And just getting the phrasing without even worrying about the pitches of the drums, it’s going to be noticeable, like people are going to recognize that.  So I started doing that, and then I realized that I can actually get some of the notes too, out of the drums, so then I just started developing this system of how I can actually play whole pieces with the melodies on the drums with the actual pitches.  So I realized I can get either a 9th or a 10th from the floor tom to the snare drum and I can get all the notes in between so I can play any tune as long as they’re not really wide ranges.  Sometimes a really high note would have to be played an octave lower [for example].”  Hoenig also confirms that he has relative pitch; an aptitude he inherited, likely from his parents, both classical musicians.

While Hoenig is consistently reluctant to accept much praise in terms of his ability to reconstruct the drums, he is passionate about how invested drummers need to be inside of the music, beyond keeping the time.

“I think drummers sometimes — not the really good ones — but other ones, tend to be able to play the drums, but not really know the songs that they’re playing that well.  So you can be an amazing technician and drummer and have a lot of coordination, and, you know, [be] a ‘drummer’s drummer’, but if you don’t know the music that you’re playing, it just automatically means that you’re not as good.  It just will not make you as good as a musician, and that’s noticeable to everybody.  I mean, melody is something that I hear really strongly on all of the songs that I play, and if I’m playing a session and a gig that I don’t know, I’ll make a point to learn the song, and really know the song.  A lot of songs have the same form, for example, like a lot of blues have the same form but they have different melodies, so if you’re going to compose a solo, for example, on that form, I want it to be different than any other song, not any other form.  I’m not thinking the form like ABA or like blues twelve.  I’m thinking of the song.  And I think the really good drummers do that.  You know…drummers know that, but that’s something that I stress a lot especially with my students.”

Hoenig’s career is as multi-faceted as his playing, with several interesting projects on the horizon.  For one, he has reunited with Jean-Michel Pilc and bassist Francois Moutin to record Threedom (Motema) which is due for release next month, marking the resurgence of one of the most nonconforming and essential trios in today’s jazz music scene.  Hoenig is also currently touring with saxophonist Chris Potter in a series of duo concerts across Europe, where they will perform a set list that is heavily dedicated to the music of Thelonious Monk.  Hoenig, who has recorded a fair share of Monk tunes on his albums as a leader, described his unsurprising fondness of the eccentric icon. 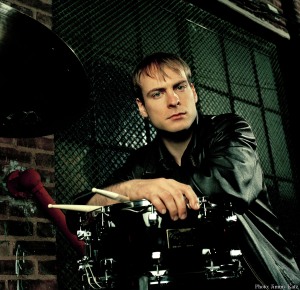 “It’s just that his tunes…they’re very rhythmic.  They’re melodies that some would call slightly awkward, which I wouldn’t even say that.  It’s just they have an interesting thing to them which is different than the ones people used over and over and over again.  Or any standards that are written with just chords and melody but no real rhythms in the tunes, so Monk – all the songs have that.  They’re built into the melody.  So it’s not just about playing the melody and the changes, but during the solos it gives the tune somewhere to go.  It’s almost saying like OK, there’s a destination…places to land.  So yeah, Monk’s tunes are especially appealing to me.  [With Chris Potter], we play probably close to half Monk tunes.  It’s fun.  And I actually used to do a duo with another drummer named Andrew Griffith in Dallas, and we did some Monk tunes as well, and for a drum duo I feel like it works really well, and actually with anybody.  Duo with anyone…those tunes definitely speak to me.  They give me a lot of ideas.”

Hoenig’s incessant need to push beyond so-called limits, and reinvent not only himself, but the vehicles used in his expression, also make him an optimal educator.  Hoenig has authored Systems Book 1: Drumming Technique and Melodic Jazz Independence (Alfred Publishing 2011) and writes for Modern Drummer Magazine.  He has also released The Ari Hoenig Songbook, which includes the complete lead sheets of Hoenig’s compositions.

Pilc-Moutin-Hoenig perform at the Blue Note in NYC on August 30 & 31.  Click here for details.