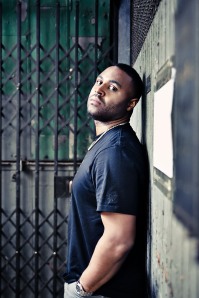 Hearing Kendrick Scott is an experience.  There’s no other way to explain the entrancing language of one of this generation’s most gifted drummers.  His masterful drumming, without fail, somehow propels his audience to a spiritual journey; a bestowal that is far beyond the music itself.  It’s been five years since Scott released his debut album, The Source, for World Culture Music, his independent music label.  The “hiatus” has been with good reason.  Scott has been touring consistently and extensively with mentor and employer of eight years, Terence Blanchard.  He has also been featured, playing on several film scores (A Tale of God’s Will, Just Wright and others) and was part of the 50th Anniversary Monterey Jazz Festival All-Star Band, which was led in-part by the late, great James Moody.  Scott also released Reverence for the Criss Cross label; an outstanding quintet session of standards from Wayne Shorter, Ornette Coleman, Kenny Dorham, and Herbie Hancock; the latter whom Scott has also spent substantial time touring with.

Conviction, Scott’s sophomore album for World Culture Music will drop early next year, and features Scott’s splendid “Oracle” band which includes pianist Taylor Eigsti, guitarist Mike Moreno, saxophonist John Ellis, and bassist Joe Sanders.  Conviction represents, as Scott describes, “The shedding of me wanting to be like all of my idols.”  This is an interesting testament given that Scott is a drummer with one of the most original voices in modern jazz.  However, he also attributes the title to a shift in the way he presents music as a composer, and also in the way he delivers those compositions, now displaying a more prominent drum presence to balance out his strong affinity for melody; a love birthed from his gospel roots.

“See, now I’m trying to reconcile two different views,” Scott explains.  “My lyrical view of what I think music should be like and feel like, and then being a drummer.  If you notice, on The Source, most of the tunes are very lyrical, but there’s not a lot of aggressive drum writing, so I actually relished in that; I love that.  But now as I’m growing a little bit, I want to write some more aggressive stuff.  I’m always the sensitive guy sometimes, and I still want to be that, but I also want to play some drums, you know?”

There’s no question that Scott is a powerhouse drummer, playing with a compulsion and dynamism that few can match.  But he also possesses an unparalleled compassion, sagacity and clarity in his playing; there are few drummers who can rouse so much emotion and create such a range and mélange of colors.  These dynamics glisten in his writing.  Scott’s compositions, like his drumming, have the ability to transport listeners in a way that is far beyond descriptions like mood or vibe; it is intensely ancestral. 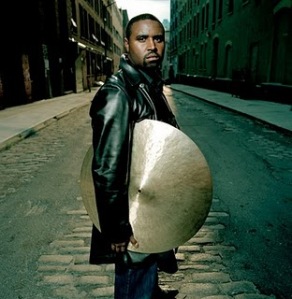 The title track of his debut album was also featured on Blanchard’s Flow (Blue Note).  Produced by Herbie Hancock, Flow is a gorgeous collection of songs from his uniquely inspired band mates, with Hancock being a featured guest on Scott’s composition.  “That was a funny situation,” Scott reminisces.  “Herbie was going to play on another tune and that didn’t happen, so my tune was the one that we felt Herbie would take to another level, and of course he did.  It all fell into place seamlessly, really.  And it was one of the first times I enjoyed a composition I had written [laughs].”  The song would go on to be nominated for a Grammy © for Best Jazz Instrumental Solo.

For “The Source”, Scott used a method of composition that is becoming more of an integral part of his writing today.  Taught to him by Blanchard, it’s a method that expanded on his basic ideas for the tune.  “There’s a process that [pianist, educator and Pulitzer Prize nominee] Roger Dickerson taught Terence,” says Scott. “It’s called If I Could, I Would Tell You.  And it’s mainly about theme and variation.  So, you take one theme and you turn it on its head, and then you write it backwards and then you write all of these variations out, and then pretty much, your original idea informs your whole writing process.  So instead of “stream of consciousness”; instead of me singing a melody and singing it all the way to the end, I’m taking my one little idea and making a whole song out of it.  So, if you listen to “The Source”,  I took [sings melody] and I transferred that to the bass, I transferred it in the melody, and then if you listen to the end of it, I elongated it.  Instead of a beat a piece, it’s bar a piece and then I transferred the bass notes.  So it’s just one of those things where I’m just learning how to manipulate ideas more than just “stream of consciousness” now.  It’s interesting to watch Terence teach it because it has this whole different…it gets so in-depth.  I mean, it’s infinite.” 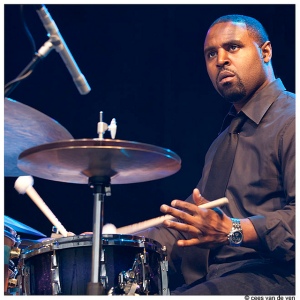 Scott has also adopted this same method to inform his developed philosophy about his purpose on the bandstand.  He explains, “Usually when I play the drums, all of the elements of the ideas from the foundation of the tune itself, is one layer.  The people I’m playing with are another layer, and then my imagination is the top layer.  But the bottom layer is my references, right?  My references of knowing like, what Ben Riley has played, what Al Foster, or Shadow Wilson has played; Max and all of those guys.  So you have your references, then you have the tune, people, and then on top of that, I think you have your imagination.  So you’re hearing all of those things, and the hierarchy is those guys, and what you’re playing is the next level and then relating to the people is paramount, and then your ideas are paramount but they’re not as paramount as the basis…for me.  So what I try to do is use that If I Could, I Would Tell You if we’re playing something like ‘All The Things You Are.’  I’m going to use things from the tune because we’re playing the form of the tune, or lets’ say Stablemates because I always use that as an exercise.  I say, OK take “dah-dah-dah”;  just three notes, and make it go all the way through the tune.  And then using the ideas of the people that you play with to inform you in creating those ideas, and as you can see it starts creating a web a huge web.  And you’re like ‘Oh wow, all of these things are springing from three notes.’  So that’s just the way I’m starting to compose now; just little small elements that I can manipulate, instead of the really big ones… the through-composed things.”

Scott credits his several years in Blanchard’s band to much of his growth as a drummer, and particularly to his development as a composer.  Blanchard has among other things, augmented the realm of possibilities for jazz musicians, becoming one of the film industry’s most revered scorers.  For Scott, Blanchard’s early advice to “learn to do what you do,” helped him to develop such striking individuality.  “It took me so long to figure out that that’s what I need to do,” says Scott.  “Because even if someone says that…you know.  So that release of surrendering to that…that was like a huge light bulb moment.  So, I always attribute that to Terence, because I don’t think it would have happened in other situations.  Well…I think it would have, but I don’t think I would have had the opportunity for things to just bud the way they have over eight years of playing with him, and him being encouraging about it.  Because I think people can encourage, but then you’ll forget.”

Blanchard is not Scott’s first or only point of reference when it comes to composition.  His mother, an accomplished pianist, was also very impressionable on Scott.  “One of my mother’s good friends was song writer Michael McKay, so I was always in an environment where people were being creative and writing not necessarily just jazz, but gospel music,” says Scott.  “I only came to start composing in jazz when I turned fourteen or so.  All before then, it was just pretty much gospel music or classical music that I was around, you know?  And R&B and stuff at home.  So when I finally got to high school, I just started opening up and just kind of writing down ideas here and there but not really knowing what the hell I was doing.”

Scott is a product of the burgeoning group of jazz musicians that came out of Houston’s renowned High School for the Performing and Visual Arts; a cultural hub that exported the likes of Jason Moran, Mike Moreno, Eric Harland, and Chris Dave to the New York City jazz scene.  He went on to the prestigious Berklee College of Music in Boston, and before graduation he had already caught the attention of several jazz greats, gigging with Pat Metheny and Kenny Garrett.  But it was soon after graduating that Blanchard would grab up the immensely talented and budding drummer.

Years and mammoth transitions and experiences later, Scott has made an indubitable mark as a truly inspired and brilliant artist.  With Conviction, the suitably titled project will create another benchmark for possibilities.  “I’m pretty proud of it,” says Scott.  “It’s a departure from The Source.  A little more aggressive and little more drum oriented, which is different for me because I always said I want the drums to be powerful, yet transparent, and I think any great musician… his musicianship is always that way.  It’s always upfront, but it always lets the other things around it shine through.  So the transparency is always something I’m looking for in my drumming.”

That transparency spills over to facets beyond Scott’s drumming.  There is accordance on a human level that Scott embodies off of the band stand. And when it speaks through his art (both writing and performing) it can’t help but inspire.  For Scott, there is never a sense of being settled, but constant searching.  “I heard that Prince gets up every day and writes a song; same thing with Wayne [Shorter],” says Scott.  “I wanna become married to the process.  There’s this book Stravinsky wrote called The Poetics of Music and he talks about there being two kinds of writers.  There’s one that writes from inspiration and one from necessity.  So mostly I’ve been an inspirational writer, I’ll say ‘Oh this picture is beautiful, let me write something.’  But he said he was more the type of guy who gets up and says I’m going to write now. I’m going to make it happen.  So I’m just learning every day from that and going between those two types of writing; the necessity and the inspirational, and just trying to bring that to light through my compositions.”♦